America’s Churches Have Put the Savior and Head of the Church Outside the Church. 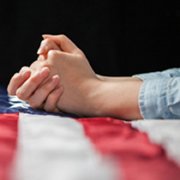