(Austin Wartner sent the following report to be shared with Global Intercessors.) 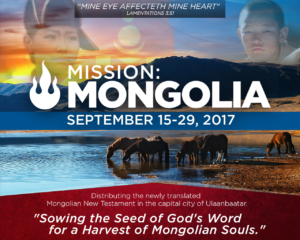 “We praise the Lord for the opportunity to distribute God’s Word in Mongolia. Since our last update, we had a total upheaval of our plans. Our distribution of the Gospel of Mark was going significantly well. Our first day on the streets, we handed out over 13,500 copies. During our second day, we were stationed in heavy foot-trafficked areas in the heart of the city and as a result, we were able to hand out over 21,500. However, during our second day of distribution, we ran into some significant problems. Two of our teams were stopped by an immigration officer and held for a couple hours. Turns out, they had received phone calls of people complaining about what we were doing. They took two passports and demanded that our whole group come to the immigration offices the next morning. We followed orders and I (Bro. Wartner) met with the immigration officer the next day. According to him, what we were doing wasn’t “legal” and required that we leave the country. From what we understood before coming over, this wasn’t the case, but laws sometimes are interpreted differently and inconsistently in countries like this. Evidently somebody simply just didn’t like what we were doing and wanted to put a stop to it. There is still some grey areas of “religious liberty” they haven’t quite figured out yet, foreigners distributing religious material is evidently one of them. Fortunately, they allowed us to stay till our ticketed date (Sept 29) instead of requiring we leave earlier, though they held on to our passports for the duration of that time. On top of that, we could not pass out any more Gospels of Mark and had to reconsider our plans for the next week and a half. 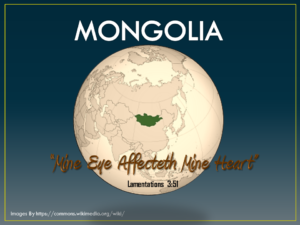 “Fortunately, all things work together for good. After these events, people in our group gave many great testimonies on the receptivity of the people who received a copy of the scriptures, particularly the young people of the country. Though our goal of distributing 100,000 copies wasn’t realized, we believe the 35,000 that did get out did make a difference. With seeds planted, we simply did what we could do, pray. We had wonderful prayer meetings during our morning/evening devotional times as a group. People in our group prayed with a brokenness for the country and for others back home.

“We spent time “prayer walking” in the areas we had distributed, asking God to continue to open up this once closed, communist country. As a group, we felt that God enabled us to focus on what the country needed more of, intercessory prayer. On top of these things, God gave us the privilege of witnessing the birth of an indigenous Mongolian Baptist church in a country town north of Ulaanbaatar; an event we pray will become more of a 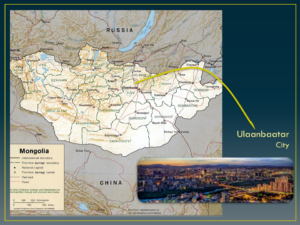 common place for the nation in the upcoming years. The missionaries we partnered with testified how the Mongolian brethren were greatly inspired to reach their country for Christ as a result of our group. And even despite the language barriers, the Lord opened doors for us to testify to English speaking Mongolians as well. Our group learned much about God, ourselves and the need of this country and others like it. Our hearts were greatly impacted by everything we saw and experienced. We believe that we got to be a very special part of the spiritual history of Mongolia and we pray that God will further His work by what we were able to do.

“Sadly our group was officially deported from Mongolia the day we left. We are all restricted from returning to the country for 3 years. Fortunately, from my understanding, they went “light” on us as we didn’t receive any fines, they let us stay the duration of our time and they could have barred us for an even longer time period then they did. Though this was an unfortunate experience, I know though these events are spurring some conver- sations with key people connected to the country. There is an American lawyer who goes to an Independent Baptist church in Texas who is a top legal advisor for the country and helped FirstBible International get things rolling for the translation of the New Testament. Long story, but he will be heading to Mongolia in October and during his trip, plans to address the issue with the top officials he knows. From what we learned, the Mongolian government has a special emphasis this year on the advancement of civil rights, which our situation serves as an area the country needs to work on. We are hoping and praying these conversations will lead to the doors opening more so in the country.

“The Lord though is still at work. Pray for the translation of the Mongolian Old Testament. Work has begun to see that come to fruition. Thank you as well for your prayers and support! They were felt!”